Sending a Message of Love, Hope, and Forgiveness

Although you probably do not recognize Kim by name, you have more than likely seen her photograph. Around the world, Kim is known as “the girl in the picture.” That picture is an image of a young, naked girl, running and screaming in horror after being burned by napalm during the Vietnam War.

By all accounts, Kim Phuc had a normal and happy childhood. She and her family lived in a nice house. She rode her bike to school every day, and she had a lot of friends. More importantly, Kim said, “I felt safe and loved.”

Although you probably do not recognize Kim by name, you have more than likely seen her photograph. Around the world, Kim is known as “the girl in the picture.” That picture is an image of a young, naked girl, running and screaming in horror after being burned by napalm during the Vietnam War. 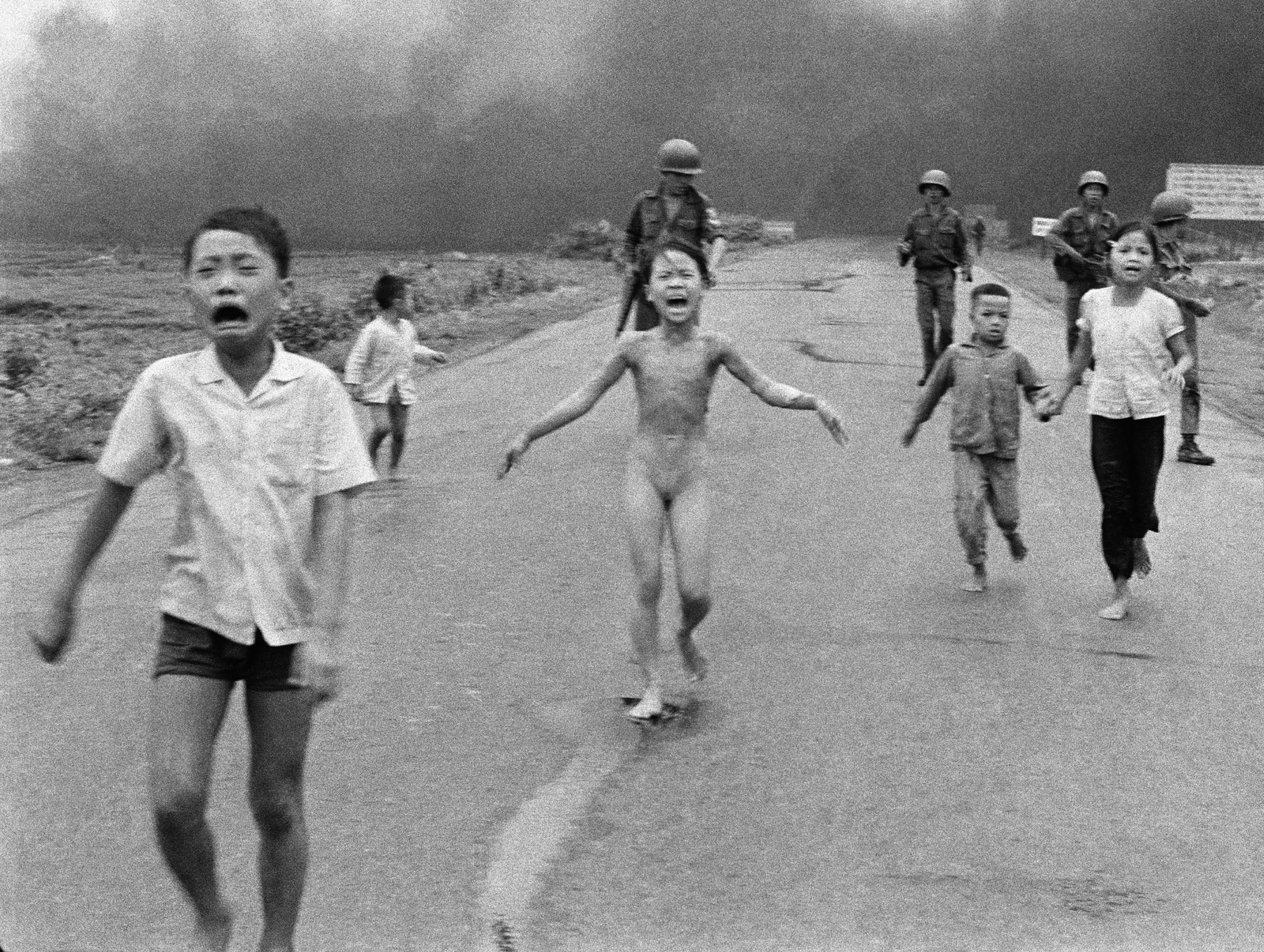 This 1972 photograph of young Kim Phuc (center) became one of the most unforgettable images from the Vietnam War.

In 1972, Kim was 9 years old, living a peaceful life with her extended family in Trang Bang, a small village in Vietnam. Kim said, “I was never afraid before the war. And then the fighting started.” Kim and the other villagers were instructed to hide in the village temple, which was designated as a safe place in the village. However, the temple was not safe.

Burning napalm filled the air and clung to Kim’s young body. Napalm is a thick, jelly-like substance which burns at 2,200 degrees Fahrenheit  and is used in military warfare (for comparison, water boils at 212 degrees Fahrenheit).

Kim’s clothes caught fire, so she started running and tearing her clothing from her burning flesh. As Kim ran down the road in terror and in pain, a photographer by the name of Nick Ut captured the moment on film. Ut has been quoted as saying that Kim was repeatedly yelling, “too hot, too hot” in Vietnamese. Ut put down his camera and drove Kim and the other children to a nearby hospital.

The next day the photo of Kim was printed on front pages around the world. The photo became an instant icon of the horrors of the Vietnam War. Ut was later awarded the Pulitzer Prize in journalism.

Photos have the ability to create an emotional impact on a viewer that words alone cannot. Reading that a young girl has been badly burned by napalm is quite different than seeing her horror-struck face and her naked and traumatized body.

“The frozen moment remains. It can haunt. It can hurt and hurt again,” wrote M. Mallette of the power of photography in “Should These News Pictures Have Been Printed?” (Popular Photograpy, March 1976, p. 120). “It can also leave an indelible message about the betterment of society, the end of war, the elimination of hunger, the alleviation of human misery,” he added.

Photos do have the ability to effect positive change and the photo of Kim did help change the way people saw the Vietnam War. But the impact of a photo such as this on the individual subject must not be ignored. People worldwide know this photo, but they do not know Kim’s story.

The attack and subsequent photo changed Kim’s life forever, but it did not destroy her spirit. Today, Kim boldly states, “Terrible things can happen, but if we are lucky, we can learn from our experiences and it can help us to become stronger.”

Kim was not expected to live after the attack. When her parents found her three days later, she had been left to die in the “death room” of a local hospital. But Kim did not die. She was transferred to a larger hospital in Saigon where she remained for 14 months and endured 17 surgeries. She describes the napalm burn as “the most terrible pain you can imagine.” Kim still has physical pain to this day, but she does not focus on the pain.

Upon finally returning home, Kim thought she was returning to her normal and peaceful existence. But everything had changed. Her family home had been destroyed, her body was covered in scars, and she had a lot of anger.

Vietnam is a hot country and Kim wanted to wear short-sleeve shirts like the other girls. Kim said she would compare her two arms: one was “beautiful and smooth” and the other was scarred. She said, “I had a dream to look like other girls. I felt sorry for myself.” Kim also feared being alone. She said, “I thought I would never have a boyfriend because of my scars.”

In additional to the physical pain and emotional trauma, the Vietnamese government turned Kim into a war symbol. Vietnam is a Communist-controlled country, and Kim was not free to make her own decisions. Kim was watched 24 hours a day. Officers would pick her up at school and force her to do media interviews.

Kim loved school and had aspirations of becoming a doctor. Kim said, “I wanted to be left alone to study, but they would not let me.” More than anything, Kim longed “to be free.”

In 1986, Kim obtained permission from the Vietnamese government to study at the University of Havana in Cuba. During her studies, Kim met a young Vietnamese man named Bui Huy Toan. She said with a shy smile, “he was so cute.”

Kim added that she was worried about what he would think of her scars. But Bui loved her for who she was, and he told her, “Every time I touch your scars or see them I love you more because I know how much you suffered.”

Kim and Bui were married in 1992. The Vietnamese government granted them permission to honeymoon in Moscow. On return from their honeymoon, the airplane stopped to refuel in Newfoundland, Canada. Kim and Bui deplaned and asked the Canadian government for political asylum in Canada. Their asylum was granted, and today, Kim and her husband live a peaceful life in Toronto, Canada.

Kim joked that at the time, she only knew three things about Canada: “It was cold, people spoke English and French, and the flag was pretty.” Kim and her husband arrived in Canada with nothing but the clothes on their backs. But Kim told her husband, “We have each other, and we have freedom.”

Today, Kim and Bui have two sons who Kim calls “my miracles.” Thomas, 13, and Stephen, 10, speak three languages, and Kim says with a proud smile, “They always correct my English.”

Finding peace did not come easily for Kim. But over time, she learned to stop complaining and start counting her blessings. She said, “I stopped asking, ‘why me?’ Instead I asked, ‘God, please help me.’”

Although Kim was healing emotionally, the notoriety of the photo would not let her go. One day on the streets of Toronto, a photographer spotted her, and the next day she was once again thrust into the public eye. She said, “I wanted to hide from the photo, wanted to lead a quiet life, but the photo haunted me.”

But Kim learned if she was unable to escape it, she could use the attention for peace. She said the picture became a “powerful gift.”

In addition, Kim credits the photographer, Nick Ut, with saving her life. Today, they maintain a close relationship, and she affectionately refers to him as “Uncle Ut.” 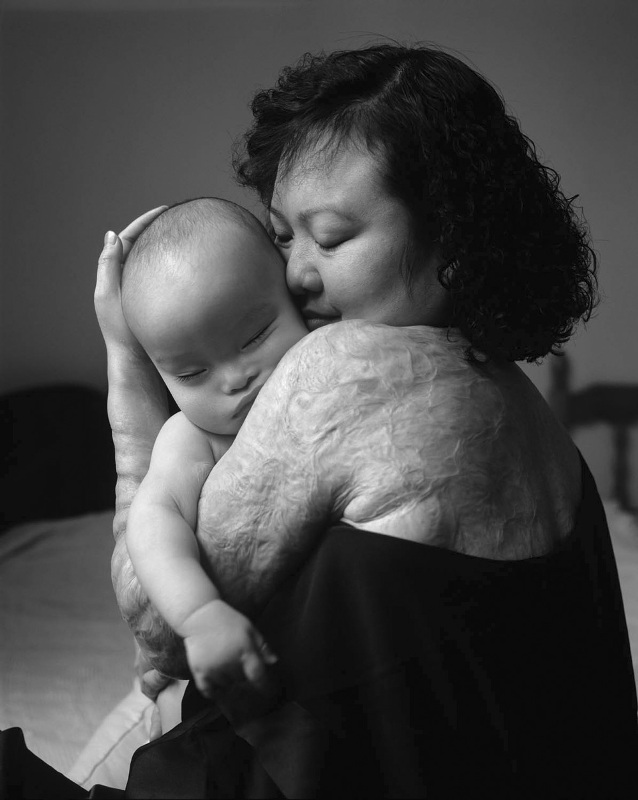 Kim knows that she should have died in the Vietnam War, but she began to realize that her life was saved for a reason. Kim learned that there was “value in suffering.” Here is her testament:

Having known war, I can know the value of peace.

Having lived in government control, I can know the power of freedom.

Having known pain, I can now know love.

Having known poverty, I learned to value what I have.

Most important of all, having known hatred, power, and corruption, I know the value of faith and forgiveness.

Kim added, “I forgive but don’t forget. Faith and forgiveness are more powerful than napalm could ever be.”

The Power of Forgiveness

The fame that the photo brought Kim has allowed her to become an advocate for peace. In 1994, Kim was named as a UNECSO Goodwill Ambassador. As an ambassador, Kim travels the world promoting peace and understanding.

She has also begun the Kim Foundation International, which helps to heal the physical and psychological wounds suffered by child victims of war. Kim travels to meet many of these innocent victims with the intention of restoring hope to their lives. Today, Kim says, “I don’t cry for myself, I cry now for other children.”

Kim’s message to the world is simple but profound: “If that little girl could learn to forgive, everyone else can do it to. If everyone can learn to live with love, hope, and forgiveness, there would be no need for war.”

Kim wants the world to learn a “new way” of looking at her picture. She said, “Don’t see that little girl as crying in pain and fear. See her as crying out for peace.” She added, “My photo is a symbol of war, but my life is a symbol for love, hope, and forgiveness.”

Nicole Elise Smith, PhD, is an assistant professor at the Manship School of Mass Communication at Louisiana State University. She is also a burn survivor. Nicole can be contacted at nesmith@lsu.edu.